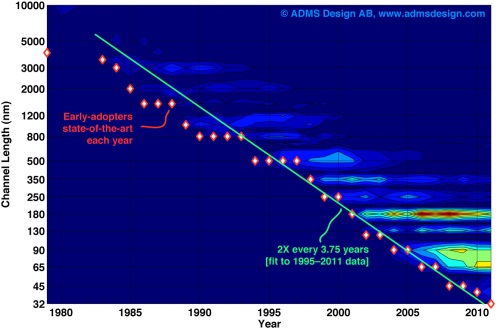 Figure 1. Distribution of CMOS nodes used for scientific ADCs over time. Color represents number of publications. The early adopter state-of-the-art data points are superimposed along with a scaling trend estimated from 1995–2011 data.

ADOPTING NEW TECHNOLOGY: The rate at which scientific ADC implementations migrate to newer CMOS technology is discussed in this post. It was previously observed in [1], using a more one-dimensional approach and data until March 2010. Here, updated ADC survey data is used, and the 2-D distribution of scientific ADC implementation papers over CMOS node and publication year is analyzed. The result is illustrated by the “heat contours” in Fig. 1. Starting with dark blue, the colors represent paper counts of 0, 1, 2, 5, 10, 15, …,  and 40/year, respectively.

Adoption rates, systems on chip, and the scaling gap

Traditionally, there has been a lag – or “scaling gap” – between analog/mixed and digital ICs. Digital ASICs have nearly always benefited from using the most recent technology, whereas analog/mixed ICs have faced new design challenges for every step of scaling. Consequentially, ADC designers have lingered in older, or custom, technologies where they knew they could meet the spec, while digital ASIC designers switched to new nodes as soon as possible. This approach was acceptable – perhaps even optimal – as long as ADCs were used as stand-alone components. Moving into the age of the SoC (system on chip), the scaling gap is increasingly unacceptable. The A/D-converters must be on the same chip as the rest of the circuit, and migrating the digital parts backwards is almost never an option. Therefore the gap must close.

Personally, I believe that this SoC-driven need to close the scaling gap is the most likely explanation for the increased rate of early adoption observed in [1] and mentioned above. If you have any other suggestions, please share them with us in the comments below.

If the current scaling trend should continue, early adopters would implement ADCs in 5.5 nm CMOS by 2020. As mentioned in [1], that is well below the technologies predicted available for RF/AMS design by 2020 [3]. As the gap closes between analog and digital, we will therefore see a slowdown in adoption rate.

In fact, the RF/AMS data in [3] suggests that the scaling gap is already quite small. A minimum L = 24 nm for HP logic in 2011 should be compared with the most deeply scaled ADC in 32 nm CMOS, presented by a team from Intel [4]. Since a small lag between digital and RF/AMS ASICs (as well as between technology “year of production” and ADC “year of publication”) may be inevitable, a slowdown in early-adoption ADC scaling could be just around the corner.